Once the new musical opens at the Phoenix theatre in London

Once the enchanting and evocative new musical starts previewing at the Phoenix theatre in London this Saturday 16th March. Fresh from the show’s success in Dublin it transfers in to the heart of the West End with an opening night scheduled for the 9th April 2013.

The musical Once is based on the film of the same name Once: The Musical, a huge hit on Broadway last year the show received 12 Tony Award nominations, from which it picked up eight awards, including best musical. Irish playwright Enda Walsh won best book, John Tiffany was named best director of a musical and designers Bob Crowley, Natasha Katz and Clive Goodwin were also victorious in the scenic, lighting and sound design categories.

The show features the hit song ‘Falling Slowly’. Once is a romantic musical, with a simple stripped down love story. If you like your musicals with plenty of glitz and glamour then this show isn’t for you. It is thought provoking and poignant and certainly one for the romantics. 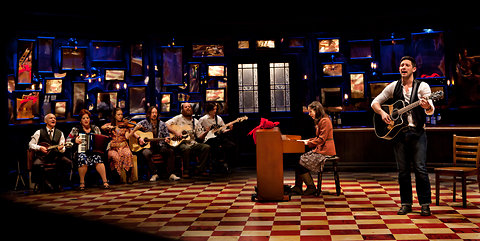 Once the musical at the Phoenix theatre in London

Shows in London are pleased to be able to offer some fantastic deals for this show. Tickets are on sale from just £37.50.

A great value meal deal is available for the previews until the 8th April with a best priced ticket and a free meal at either the Radisssonblu Edwardian Leicester Square restaurant or the Radissonblu Bloomsbury Street restaurant all for just £59.

From the 9th April a top priced ticket for £67.50 is available with a free meal at the super deluxe Radisssonblu Edwardian Leicester Square restaurant or the stylish Radissonblu Bloomsbury Street restaurant.

The Leicester Square Restaurant is located within the Radissonblu Edwardian Hotel, offers an excellent choice of contemporary and classic seafood dishes in a perfect central London location, just a 5 to 10 minute walk from the Phoenix theatre. Relax having your delicious pre-theatre meal in stylish modern surroundings of rich cream leather and original art. The Leicester Square Restaurant is Modern British and included in your meal deal is a two course meal.

The Bloomsbury Street Bar and Restaurant is a cool and intimate space in the heart of London’s avant garde creative quarter. It has been stylishly refurbished, and with its dark colours has a romantic feel, perfect for that pre-theatre meal before Once the musical. This luxury restaurant oozes elegance and sophistication and is a five to ten minute walk from the Phoenix theatre. The Modern European menu is guaranteed to impress. Menus are created by Redmond Hayward, who has won many culinary accolades including a coveted Michelin star at his previous venture, Redmond s.

Tickets for Once the musical and fantastic free meal deals are available on-line at ShowsinLondon.co.uk or call one of our friendly team of experts on 0871 976 976 7