Free pre-theatre meals and great tickets deals for Rock of Ages, Viva Forever, We Will Rock You and Wicked

Spring has certainly sprung, with the bulbs bursting in to life, night frosts and a sprinkling of snow now is just the time to get yourself down to a snug theatre in London and enjoy the best that the West End has to offer.

There are some blooming marvellous deals available from Shows in London to get your feet tapping, or indeed stomping, so if it’s Rock or Pop, or Pop and Rock, that gets you to tap those frost bitten toes we have just the deals to warm you up.

Rock of Ages that electric and hilarious comedy musical featuring some of the 80’s classic rock tracks from the likes of Bon Jovi, Boston and Journey amongst many others, as well as power ballads from the likes of Foreigner and Styx is now on sale at Shows in London for an incredible £35 per ticket for best seats that are normally priced at £65. Rock of Ages is now showing at the Garrick theatre in the heart of the West End and is certain to get your blood pumping, so it’s not only the weather that is feeling like January it’s just like a January sale where you can save a whopping £30 per ticket. YES, A SAVING OF £30 A TICKET! (Especially for those that have listened to too many rock tracks at full volume!)

Rock of Ages the musical at the Garrick Theatre in London

The new Spice Girls musical, Viva Forever, is now playing at the Piccadilly theatre and features all those hit songs from the sensational Spice Girls, with a story written by creator of Absolutely Fabulous, Jennifer Saunders. Whilst it has received mixed reviews, if you are a Spice Girls fan or a fan of French & Saunders then this show is for you. So forget about what those theatre luvvies may have written get yourself down to the Piccadilly theatre and enjoy a free meal at Planet Hollywood on Shows in London prior to the performance. That’s right a ticket and a free meal all from just £25 available from ShowsinLondon.co.uk 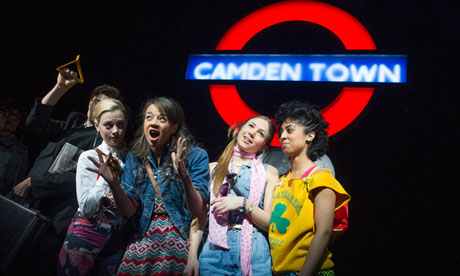 Viva Forever! at the Piccadilly Theatre in London

And talking pop royalty, or should that be Rock Royalty? Queen, her majesties of Rock and Pop are still presiding over the long-running and hugely entertaining hit show We Will Rock You. With a brilliant tongue-in-cheek story by comedian Ben Elton, this show is certainly one to have your feet stomping and your heart pumping, better than a visit to the gym. Featuring over 30 of Queen’s greatest hits, We Will Rock You is in its 11th year at the Dominion theatre in London. With tickets from just £26.49 and top priced seats normally £63.25 at only £38.50 you can make great savings of up to £24.75. A bargain if ever there was one. And not only that you can get fantastic meal deals for just £49 which includes a best available ticket and a two-course pre-theatre Italian meal for just £49. I thought I’d repeat the price because it is so unbelievable.

We Will Rock You at the Dominion Theatre in London

Wicked deals, I think you will agree. The fabulous show Wicked at the Apollo Victoria theatre in London now on sale at showsinlondon.co.uk with no booking fee! This offer is available for the months of March, April and May, but tickets are selling fast and the offer must be booked by the end of March, so hurry whilst stocks last.

Wicked at the Apollo Victoria Theatre in London