Legendary Australian comedian Barry Humphries creator of the iconic Dame Edna Everage and glorious Australian attaché Sir Les Patterson is performing at the London Palladium for a limited season as part of his farewell tour at the ripe old age of 79. 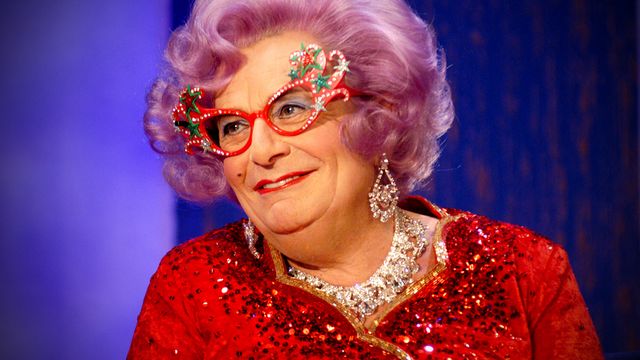 Act One of Eat, Pray and  Laugh features Humphries in the guise of gentle, grandfatherly Sandy Stone and also as  the outrageous Australian attaché Sir Les Patterson, perhaps Humphries’ greatest creation. However, according to iconic Australian housewife Dame Edna “this is just a bit of foreplay really before I make an orgasmic appearance in Act Two!”

Surrounded by spectacular sets Humphries takes full advantage of the spacious London Palladium setting. With an array of stunning and talented dancers, the show is a real sensation and Dame Edna promises to ‘empower’ her audiences with what she describes as ‘a meditation on loss, gender, climate change, gay marriage and ethnicity’. Expect an abundance of near-the-knuckle jokes and references and certainly plenty of audience participation as Humphries in his various guises prays on sending up his audience members mercilessly.

Eat, Pray, Laugh  will be the final chance to see Barry Humphries, 80 in February, one of the world’s sharpest wits and greatest comic talents before he relaxes and puts his feet up after 50 years of performing.  Barry Humphries has already bid farewell to audiences in Australia and New Zealand, receiving rapturous standing ovations and critically acclaimed reviews as he bows out with a bang.