Agatha Christie is back in the West End

Agatha Christie is back in the West End

Announcements have been made for a memorial statue commemorating Agatha Christie to be erected in the heart of London’s West End. It will be placed between Cranbourn Street and Great Newport Street, just a stone’s throw from the St Martin’s Theatre where her greatest West End success is currently being performed. The Mousetrap has the phenomenal honour of being the longest-running show in London and in fact, the longest-running play anywhere – celebrating its 60th Anniversary later this year.

Opening in 1952, it has been performed almost 25,000 times – and is famous for its surprise ‘twist’ ending, of which the audience is strongly urged to keep a secret.

The new statue will be shaped the form of a book, featuring an elliptical cavity which will hold a bust of Dame Christie in a profile view. Although known in Theatreland for her work as a playwright, the symbolism of the book reflects her immense success as a novelist in general – especially the series of detective novels Hercule Poirot and Miss Jane Marple.

The magnificent piece, to be cast in bronze, has been commissioned by Christie’s grandson Mathew Prichard and The Mousetrap’s producer, Sir Stephen Waley-Cohen, who also owns the theatres of other shows in London – the Victoria Palace Theatre where Billy Elliot is performing and the Ambassador’s Theatre which is the home of Stomp. 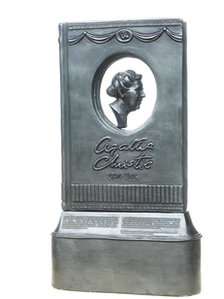 Though it is the first piece in memory of Agatha Christie to be displayed in London, a bust of the dame was placed 22 years ago in Torquay, Devon, where she was born. The unveiling marked the date of her 100th birthday, on 15th September 1890.

However, this is not the first instance of tributes being paid to individuals who have been influential to the performing arts. There is a great tradition of theatres and playhouses being named after such persons – such as the Noël Coward Theatre and the Harold Pinter Theatre, after great English playwrights – the latter of which received a Nobel Prize for Literature. On Shaftesbury Avenue exists the Gielgud Theatre named after John Gielgud, the celebrated English actor, director and producer. He is one of a few artists to have been awarded a Tony, Grammy, Emmy and an Oscar in his time.

Another celebrated statue in the heart of Theatreland, surround by the greatest shows in London in Piccadilly Circus, is the Shaftesbury Monument Memorial Fountain. It is the subject of heated debate – popularly mistaken as a tribute to Eros, the Greek god of one-sided love it is in fact a statue of Anteros, the Greek god of requited love. It was erected in 1892 as a tribute to the charitable works of Lord Shaftesbury, a great Victoria philanthropist and politician. For this reason, the winged bude character is also sometimes referred to as The Angel of Christian Charity.

The memorial to Agatha Christie is set to be unveiled on 25th November 2012, to coincide with the date of The Mousetrap’s Diamond Jubilee.